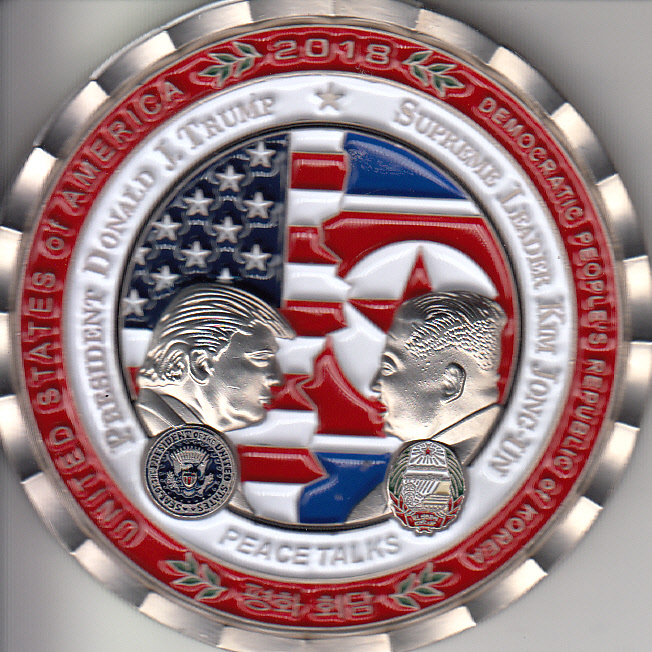 I ordered this on May 25th, when I thought it was funny and not too expensive. It arrived on August 28th, after I’d given up on it’s arrival entirely. That’s three months after paying for it via a sketchy looking paypal address.

The paperwork was folded in three, both directions, to make it similar sized as the coin itself. That is why it wouldn’t lay flat in my scanner. 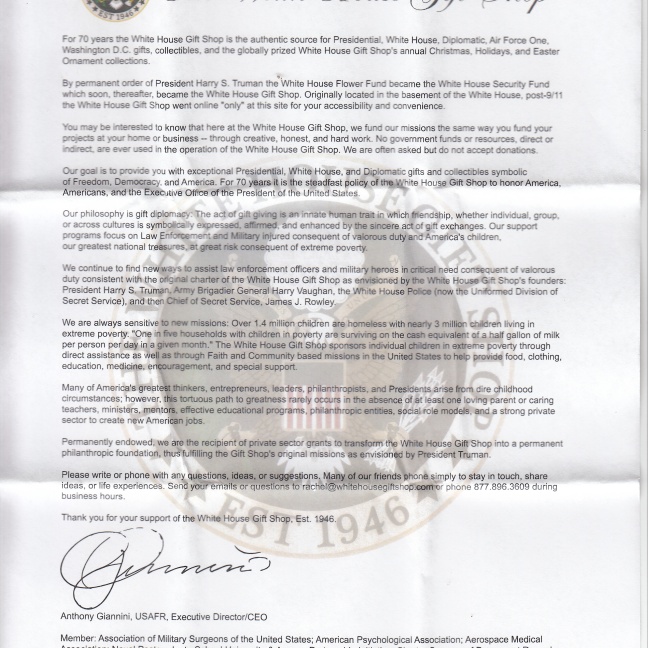 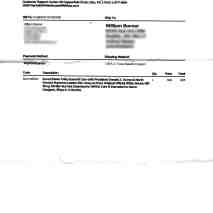 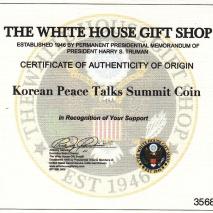 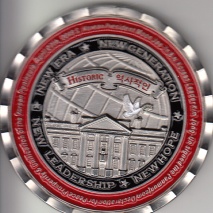 The white house gift shop is an interesting company. It claims to have been created under charter from President Harry Truman, but has nothing to do with the US government at all.

The details of this coin blew up on both cable media and social media when Donald Trump announced he would be meeting with Kim Jong-Un, and then further announced that he wouldn’t. After the announcement of the cancellation, the price on the coin dropped under $20, convincing me to buy one as a funny souvenir. After I ordered it, the summit was rescheduled and actually happened.

When I didn’t receive the coin in the first few weeks I looked back in my mail history and couldn’t find any confirmation that I’d actually ordered it beyond the pay-pal receipt. I remembered that I’d ordered the item using the web browser in my phone, while sitting in a coffee shop in another country. I mostly decided to chalk it up to an inexpensive learning experience.

Further research led me to this series of articles, which were interesting details about what the white house gift shop really is, and any relation to the government. WTF Is The White House Gift Shop? A TPM Special Report and White House Gift Shop, TPM Investigation Continues! I recommend reading each of them.

I recently bought some cereal and the back of the box struck me as fairly odd.

I was initially thinking that the really odd part was simply the expressions on the kids faces and how much joy or fear they seemed to be expressing. I’m not a morning person and I rarely express much joy while eating my breakfast cereal. 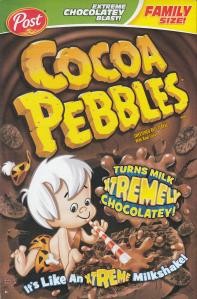 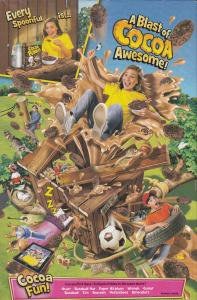 Because I know that I find looking at old consumer goods interesting just a few short years after they seemed normal, I decided I needed to scan a copy of the box. After I was looking at the pictures just now, I realized that the image could be titled Colon-Blow and seems to be something I might not want to be eating.

I found the receipt for the first PC my father bought this last weekend. They are in the process of significant downsizing, and while I don’t want to uselessly clutter up my own space with things that were in their garage, having a PC in my home for my final years of high school affected my entire life.

How much did you pay for your first PC and enough software to make it useful? 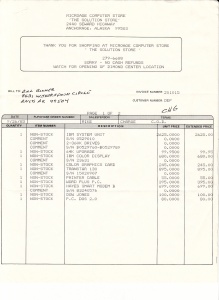 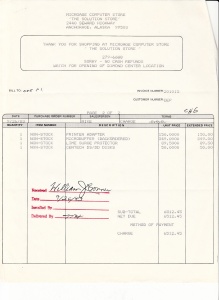 This machine had two 360k floppy drives. I ran a bulletin board system that booted and ran from one floppy drive, and stored files available for download on the second drive.A box of 10 360k floppy disks cost $50.

The printer adapter was not built into the machine and had to be purchased separately for $150. One extravagance he purchased was the microbuffer for $349 that went in-line between the computer and printer, allowing the computer to send more of its print job to the microbuffer and the microbuffer would feed the printer at the speed it could accept it. This was long before anyone would think about using multitasking in a home computer, or even think that printing might be a separate task.

yet another old story:

Once a woman was in labor; she was having a really tough time dealing with the pain. The doctor came to her husband and her and told them of a new experimental drug that allows the woman to transfer 25% of the pain to the father. The husband feels really bad for his wife so he decides they will try it.

A few hours later, the wife gives birth to a beautiful baby boy. The next day they take their newborn son home, and there they find the mailman dead on the doorstep.

Three tortoises, Phil, John and Dave, decide to go on a picnic. So Dave packs the picnic basket with beer and sandwiches. The trouble is the picnic site is ten miles away so it takes them ten days to get there.

When they get there Dave unpacks the food and beer.

“OK Phil give me the bottle opener.”

Dave gets worried, He turns to John, “Did you bring the bottle opener?”

Naturally John didn’t bring it. So they’re stuck ten miles from home without a bottle opener. Dave and John beg Phil to go back for it.

But he refuses as he says they will eat all the sandwiches.

After two hours, and after they have sworn on their tortoise lives that they will not eat the sandwiches, he finally agrees. So Phil sets off down the road at a steady pace.

Twenty days pass and he still isn’t back and Dave and John are starving, but a promise is a promise.

Another five days and he still isn’t back, but a promise is a promise.

Finally they can’t take it any longer so they take out a sandwich each, and just as they are about to eat it, Phil pops up from behind a rock and shouts……..

Three women go down to Mexico one night to celebrate college graduation. They get drunk and wake up in jail, only to find that they are to be executed in the morning – though none of them can remember what they did the night before.

The first one, a redhead, is strapped in the electric chair and is asked if she has any last words. She says, “I just graduated from Trinity Bible College and believe in the almighty power of God to intervene on the behalf of the innocent.” They throw the switch and nothing happens. They all immediately fall to the floor on their knees, beg for forgiveness, and release her.

The second one, a brunette, is strapped in and gives her last words. “I just graduated from the Harvard School of Law and I believe in the power of justice to intervene on the part of the innocent.” They throw the switch and again, nothing happens. Again they all immediately fall to their knees, beg for forgiveness and release her.

The last one (you know it), a blonde, is strapped in and says, “Well, I’m from the University of Texas and just graduated with a degree in Electrical Engineering, and I’ll tell ya right now, ya’ll ain’t gonna electrocute nobody if you don’t plug this thing in.”

WimsWorld
Create a free website or blog at WordPress.com.