I bought a logitech bluetooth keyboard recently for my ipad. It was a bit of an impluse purchase. Costco had it on sale for $79.99 when I walked into the store. I’d seen nothing but good reviews of it, but there’s no real way of knowing something like this until you use it yourself. I’ve always said that keyboards and mice are the most personal of devices on your desk, what is comfortable for one person is unusable for another. 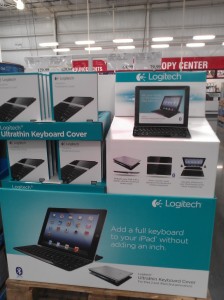 This keyboard is better than the keyboard in the HP Laptop I bought last November. The keys have a nice positive feel, and I don’t have any problem with double presses. The strangest thing is that I am constantly looking for the track pad with my thumbs, only to remember that I’m using my iPad, and have to take my hands away from the keyboard and poke at the screen.

When I originally purchased my iPad, I also purchased the apple smart cover in leather. I like the feel of the leather. The size and weight of the iPad with the cover attached are not noticeably different from the iPad alone. The most annoying thing about the cover is that the magnetic attachment system gives a false sense of security. It’s easy to grab the cover and drop the iPad. The fact that the cover provides no protection for the aluminum back of the iPad is an issue, but I like the feel of the smooth aluminum. I had my iPad engraved when I purchased it from Apple, and covering it up seems slightly wrong.

I’d previously tried out the Belkin iPad case that Costco was selling for ~$27. It initially had a nice feel to me, but made the ipad seem thick and bulky after being used to using the apple smart cover. It also added a noticeable amount of heft to the pad, and the non-slick surface, while initially comforting, later made it difficult to slide into bags that I was carrying the ipad in.

I had read nothing but positive reviews of the Logitech keyboard earlier, but was having trouble justifying spending $100 on an accessory that I wasn’t sure I’d like. http://www.zatznotfunny.com/2012-04/logitech-ultrathin-ipad-keyboard-review/ was the first I read, and http://www.chipchick.com/2012/08/logitech-ultrathin-keyboard-cover-review.html more recently. Knowing Costco’s return policy, I decided I needed to try the device for myself. I have since put the original Apple smart cover on the shelf, and am happy using the Logitech as a cover. My only complaint is that now I feel the need to buy a sleeve to carry the entire thing around in because I want to slide the keyboard into a sleeve when I’m using the tablet as a pure tablet. Since the keyboard only attaches to one side of the tablet, there’s not a good way of holding the two devices at the same time in tablet mode. The apple smart cover could be folded behind the tablet and left attached.

I’ve got the black iPad, so am quite happy with my black keyboard but evidently a new white version of the keyboard is being introduced for those who are interested in keeping things color coordinated. http://www.engadget.com/2012/09/07/logitech-debuts-white-ultrathin-keyboard-cover-for-ipad/