It’s finally time to get rid of the oldest suitcase that I’ve been keeping around. I’ve had a stack of suitcases in my storage unit for the past several years, and I occasionally pull one out if I’m traveling and need more than an overnight bag can easily carry.

This one is kind of interesting, and the stickers on it are nostalgic for me. It still has the manufacturer sticker proclaiming that it has WHEELS! 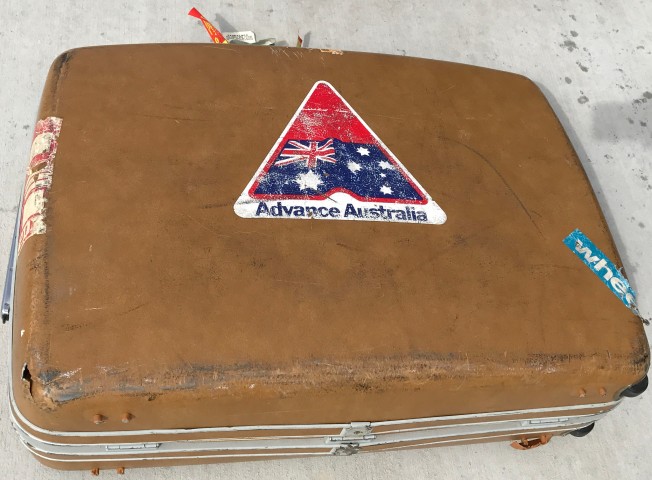 This was the first generation suitcase with wheels, and it really was a big deal. Mom bought this suitcase, but it became the suitcase that I carried most often. I know that the suitcase was purchased in 1981 or earlier, because the cruise stickers were from Christmas of 1981. This is the style case cruise ships still recommend, because it opens in the middle, lies flat, and can slide under most beds. You can see that the plastic feet for the suitcase have broken off in recent years.

We lived in Australia from 1981 to 1983. I really liked the Advance Australia logo, and anyone who’s checked luggage a lot knows that making your luggage recognizable is important.

Inside Airline Tag with our Australia address and phone number

This was the suitcase I took with me when I went off to university, with everything I needed for the first semester if school inside. When I graduated a few years later, I had a 5’x10′ storage unit full of stuff.

This suitcase has carried a lot of memories for me. Now it’s taking space in a storage unit that needs to be made available for other items.

This is the last of the stereograph pictures I had to scan, and the only one in color. It’s interesting how only the green color remains.

I don’t know if a color photography system was originally used and the colors other than green have faded, or if the color was added later. I suspect the former.

In modern warfare explosives are coming more and more into use. Streets and thoroughfares as well as rivers, straights and harbors over which it is thought the enemy may pass, are mined with deadly explosives sufficiently powerful to wreck the mightiest battleship or overwhelm a large land force. Torpedoes are usually made in forms similar to a cigar, so that they may be projected under water, the sharp end going forward. As is well known, they can be arranged to explode by contact, a time fuse, or an electric wire. The sample death dealing instrument shown in this view provided with contact arms which, when struck, thrust a spike into the interior as shown, causing explosion by percussion. Doubtless it was some such contrivance as one of those described above, which, on Feb. 15th, 1898, tore into shred and sent to the bottom of Havana Harbor, our proud battleship “Maine,” together with nearly her entire crew.

Royal Gorge (Grand Canyon of the Arkansas), Colorado, U. S. A.

“Oh! the power that piled these wonders
As the mountains took their stations;
As a great red belt rose upward in a glittering zone of fire.” — Ferguson.

The crowning wonder of Colorado is the world famed Royal Gorge. Its rock piled crags tower above the river at this point 2,600 feet. The narrow and broad gauge railroad running through the canon is one of the greatest pieces of railroad engineering ever accomplished.

This is an interesting demonstration of picking different parts of the picture to align. On the left I picked an object in the distance, a dome that seemed fairly centered. On the right I picked the seated man. in the foreground. I think the right picture works much better.

I found this set of images interesting because of how mundane it seems, and also the information printed on it.

The Library of Congress has several stereograph cards by this company, but I didn’t find this particular one. I don’t know how often subscription photos were sent out. or what the general quality of the subscriptions may have been.

“And We Just Went Smashed–(illustrated.)

The Courtesy — in those gallant Colonial Days.

An interesting thing I’ve figured out while playing with these animated gifs is the importance of picture alignment. If the pictures are simply swapped, it sometimes only adds movement. In this example I aligned the picture frame in the top left portion of the picture. you can see how much difference in overlap the photos have by the edge of either picture.

To achieve reasonable alignment, I changed the opacity of the layer to 50% while I was positioning it, then after I had positioned it changed it back to 100%.

The Birthplace of Avalanches — Mont Blanc from the Planpraz, Switzerland