I liked the look of the widget at https://www.battleforthenet.com/countdown/ related to the FCC vote on net neutrality. I tried to inset the code that would embed the widget in this post. It looks like WordPress is blocking it from appearing. Either that or the cross site access is being blocked by Google Chrome.

I bought a Bumblebee Quad from a local hobby shop a few months ago, and when I finally got around to trying to build it with a proper autopilot found that it’s ESCs used a protocol called UltraPWM that is a very uncommon protocol.

I came across this page, https://github.com/sim-/tgy/issues/13 , which leads me to believe that I should be able to flash the ESCs with a simonk tgy firmware and use the hardware I already have.

I came across a cable from hobbyking that is designed to make contact with the surface mounted atmel device and allow programming without any soldering or desoldering. http://hobbyking.com/hobbyking/store/__27195__Atmel_Atmega_Socket_Firmware_Flashing_Tool.html It was designed to be used with an atmel programming device that they also sell http://hobbyking.com/hobbyking/store/__27990__USBasp_AVR_Programming_Device_for_ATMEL_proccessors.html and so I thought I’d be good to go. The cable cost $20 while the programmer cost $4, but not needing to solder anything was a very positive solution for me. 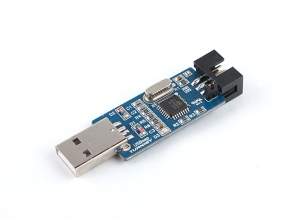 What I didn’t recognize until it all arrived was that Hobbyking has updated the USB Programmer to use a 6 conductor connector, but not updated their programming cable from the 10 conductor cable. The message boards on hobbyking discuss the change, and have pinout descriptions, but it’s been very frustrating because getting the parts to do the correct wiring has not been as simple as plug and play. 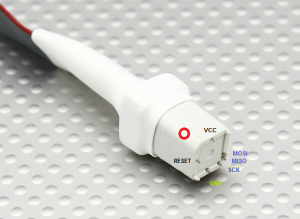 This has been extremely frustrating to me as the parts I ordered were billed as no soldering required, but could not be simply plugged into each other.