I followed the crowd and upgraded my iPad to iOS7 last night. I had no problems running the upgrade.

I had my iPad connected to iTunes on my laptop, told iTunes I wanted to upgrade and it started downloading. I went off and watched a movie on my TV and ignored the entire process. The upgrade was over a gigabyte, so my DSL took over an hour for it to download it. I heard the device disconnect tones from windows at some point, noticed my iPad had the Apple logo displayed and a progress bar, but continued to let things happen unattended. When my movie completed, I came back to the iPad, entered my unlock code, and confirmed the basic settings for the new OS, including confirming the WiFi network I wanted to use. No problems at all. I wish an iTunes software upgrade on my windows laptop would operate that smoothly.

The next thing I noticed was that personal groups now have multiple pages, and that each page can only hold 9 items. I believe the old system only allowed a personal group to hold 16 items. The new system doesn’t have that limit, but only displays 9 items at a time. I know that I’ve got fat fingers, and touch targets need relatively large spaces to make sure that the correct item is hit, but on my iPad, I want to find the icon, not have half of my screen used displaying the background instead of the icons I can chose from.

iOS7 subgroups only show 9 items at a time!

This got me thinking about the current trend towards flat interfaces, going away from isomorphic user interfaces.  I’ve been using a Windows Phone for several years, and am very familiar with the trend for flat interfaces. On the phone, with it’s small screen, I have found that I like the trend. In my desktop and laptop running Windows 8 I’ve been less pleased with the implementation and now seeing it on the iPad I have a similar negative reaction.

My problem with the flat interface on the larger screen is that less information is displayed on the screen at one time, with new information completely replacing the old information, even if only temporarily.

I’ve found that the flat interface feels like it’s giving me less information and wasting space even when a flat object takes exactly the same number of pixels as a textured object. I’ve got screen grabs of the Safari displaying the same web page in the old interface and the new interface. When I was in college I remember learning that when making flow charts it was better to use boxes with rounded corners and not submit drawings on engineering grid paper because the shapes themselves would cause some people to dislike your output before they even had time to process the content. I completely understand the efficiency gains of using hard corners in displaying objects, but find it interesting how much my pleasure at interacting with the objects is affected. 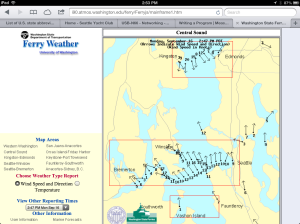 Safari in iOS6 displays filleting on the corners of the tabs, and the text has the appearance of engraving.

Safari in iOS7 displays vertical lines between the tabs, the text is flat, and the full URL is not displayed, only the host being visited.

A change to the interface of the photo app that I’m not sure if it’s because of the flat interface, or some other design decision. I now can’t seem to look at photos in full screen mode. Now, I’ve always got a bright white bar at the top and bottom displaying more information. I don’t want those constantly displayed! I want to see my photo and swipe left or right to get to the next photo! What’s even worse is that I can tell that the bar is obscuring portions of my image.  The bar is evidently displayed with slight transparency, and I can see the image visible through the bar. I have no idea how to turn this off. I’ve not been able to find a setting in the photos app, or in the settings section related to photos. In general, I’d rather have a black surround for the photos than the white surround that has now been chosen. I picked a black iPad instead of a white one for a similar reason.